Rain, beavers and life in Vancouver ...

Last Friday (July 15) marked my first three months in Vancouver: time for a quick update from this side of the pond. All is very very well here, Ariane and I are doing great. But first, the weather report:

With that out of the way, let's get on with some highlights of the past few weeks.

The first week of June, Ariane and I took the train down the coast, to the US part of the Pacific North West (PNW) - the area that (very) roughly comprises Vancouver, Seattle and Portland. The train ride itself was pretty special, riding along the ocean for a good part of it, with lots of herons flying next to the train. We spent a weekend in Seattle, and a few days in Portland.

Both were really cool places to be. Seattle still has a fair bit of grunge to it, Portland has extremely tasty (vegetarian & Ariane-friendly) food (even though the award for the best meal that week goes to Seattle's Plum). Also, Portland has Powell's, possibly the largest and nicest book store I've ever been into. I'm definitely looking forward to being there again in October, when we'll be there for the PNW Drupal Summit. Speaking of Drupal, we met up with some Drupal friends along the way.

Ariane and I in Seattle. (More pictures!)

After our PNW trip we stayed in Vancouver for a bit: enjoying East Van (the area of Vancouver where we live - I love it here), sitting on the seawall in Stanley Park, working, starting our house hunt (we're hoping to move in the fall), biking, swimming, ...

We also went to the Vancouver Jazz Festival, to see the Robert Glasper Trio. It was fantastic. Here's a video of one of their shows, last year in San Francisco (skip to 2'40" if you're not into jazz drum solos).

The first weekend of July (which also included Canada Day on July 1st, the national holiday here) we were invited by Scott and Leanne to their cabin at Lake Kawkawa (near Hope). We had a great time: meeting new friends, laying in the hammock, swimming, kayaking, kneeboarding, camp firing, ... WE SAW EAGLES! They came circling down from the mountains, and spent a while high up in a tree next to the cabin. Also spotted: a beaver who came cruising by while we were enjoying the sun. So cool!

Here's something else that's cool. These three first months in Vancouver have been so amazing, that I've decided to start the procedure to obtain permanent residence in Canada. I've registered for my English language test, which will take place on July 30th. Then in September, there will be a French test too. I've also started looking for a job, which means I will be leaving DeWereldMorgen.be/GetBasic - which feels a bit strange I have to say, but at the same time the perspective of starting a new professional adventure feels extremely exciting. I will certainly write more about all of this later, but the bottom line is that I'll be staying with Ariane in Vancouver a little longer!

So, time to meet the parents! The second weekend of July, George and Lorraine flew in from Saskatoon, where they live and where Ariane was also born and raised. After talking to them several times on Skype, it was really nice to meet them in person. We went to the farmers' market at Trout Lake (a few blocks from where we live), took a walk in Queen Elizabeth Park (great views of the mountains), and had some more of Ariane's family over for lunch. Lorraine wrote a post on her blog, and also uploaded some photos to Flickr. 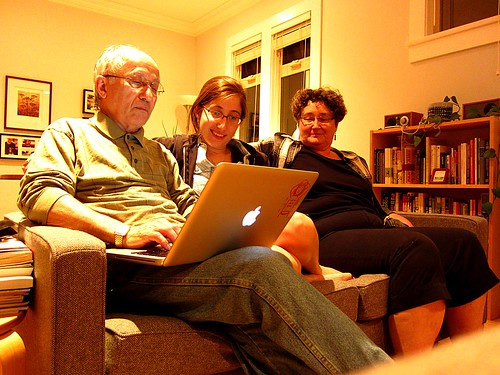 Ariane showing her dad how to use his brand new website, theputterer.ca.

A final thing for this post. Last week, Brendan and I hiked up Grouse Mountain, one of the mountains on Vancouver's north shore. We did the Grouse Grind, a Vancouver rite of passage: a track of about 3km long, and 800m 'high' - pretty much straight up the mountain. It was pretty hardcore, but really nice to reach the top, even though the mountain was completely covered in clouds. I guess we'll have to do it again some day, when it's less clouded.

The coming weeks we'll be doing some more fun things: we're going to a TV On The Radio concert, Chris and Siobhan's wedding in the Okanagan. Then, at the end of the summer, Ariane and I are going to Belgium, and to DrupalCon London. Needless to say, we're both really looking forward to taking off! Hope to see you lots of you along the way!